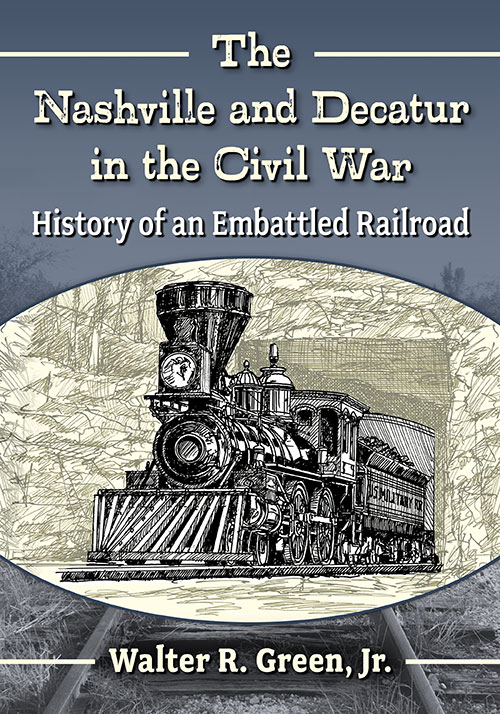 Author Walter Green, Jr. will be stopping by the Columbia branch library on Wednesday, October 19th at 6pm to discuss and sign copies of his new book The Nashville and Decatur in the Civil War – History of an Embattled Railroad – which is now available on Amazon. Mr. Green was motivated to write about the Nashville & Decatur railway to fill a knowledge gap in the written literature/history about the particular rail line.

“The N&D was important to the federals because they used it to supply men, animals and supplies to allow their armies to gain a stronger foothold in the South, including supplying General Sherman for his invasion of Georgia. It became a weapon that the federals used against the Confederacy and was highly contested because the Confederate Army and its sympathizers tried incessantly to disrupt the railroad’s operation while the federals worked hard to keep it open. The book describes the work of four key federal men who were primarily responsible for design and construction of the bridges, trestles and railroad fortifications. It discusses the most significant military activity near the railroad and has a chapter about freed Blacks, U.S. Colored Troops and contraband camps. It also presents recent research about perhaps the most fascinating section of track on the N&D during the war – just north and south of the railroad’s one tunnel in southern Giles County. One of the six appendices is about the 1901 passenger depot which the author hopes can be rebuilt as a beneficial feature for the city and a monument to the rich history of the railroad.”

Mr. Green is a retired civil/structural engineer who currently resides in Franklin, Tennessee with his wife, where they are proud parents and grandparents. Mr. Green’s research and reports have been used by both the City of Franklin and the local historical journal.